A Touch of Kindness Bringing Communities Together

A peaceful, pro-democracy uprising against the president of Syria a decade ago morphed into a civil war that displaced millions of Syrians, of which 6.2 million are considered to be internally displaced, including 2.5 million children. Considered to be the biggest internally displaced population in the world, the displacement continues at a rapid pace. Well over 1.8 million Syrians faced displacement in 2017, many for the second or third time according to The UN Refugee Agency. Internally displaced people (IDP) are among the most vulnerable groups as these individuals do not cross international borders to find sanctuary, remaining inside their home countries. Those individuals who could leave the country sought refuge in many European cities, including Hamburg.

In 2015 Hamburg faced a peak in refugee arrivals and recorded the arrival of around 71,000 refugees. Most arrived from Syria, Afghanistan, Iraq, Iran, and Eritrea. “I remember it was 2016 or 2015, and we knew that President Merkel had opened up the doors to refugees, to welcoming the refugees at that time. And the news was just covering all these refugees arriving. And within the second or third day a few friends, five of us from the CrossFit Altona gym, decided to go buy stuff for the refugees,” Jean Winter recalled in an exclusive interview. 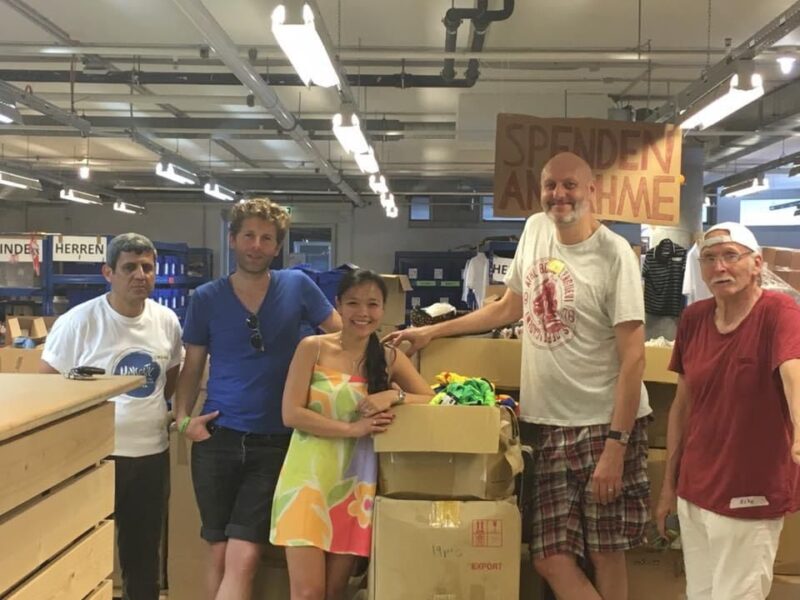 “We filled up our four cars with everything from sanitary pads to nappies for kids, to shampoo, to shavers for men, to… everything. I mean, whatever we could think of, the daily necessities, we just dumped all the boxes in our cars and we went out.” Jean recalled.  At the time the refugees were housed in the World Trade Center exhibition halls in Hamburg.

“We saw refugees spilling out, but we couldn’t see them, because there was makeshift green fencing shielding them from the outside world. But you could see a lot of movement and people inside. So we arrived and we wanted to unload all our donations and the guard basically went: ‘There’s nowhere for you to put your donations, because there’s no one to give out the donations. And you’re not allowed to do this, because you could potentially cause fights.’” The potential of a fight breaking out over limited supplies was a stark reality as at the time there was nobody to organize and hand out donations.

The group refused to ignore the need they saw before them and shifted gears instead. Mortiz Heisler, who was in logistics and initially brought the group together, came up with a plan to deliver the much-needed necessities in bulk to the refugees, while the remainder of the group handled the distribution of donations and the organization of volunteers.

Reaching out on Facebook, a group called Kleiderkammer Messehallen was formed, which later on became a non-profit association named Hanseatic Help. It was estimated that around 22,000 volunteers from all walks of life were involved with the refugee support effort throughout the region.

Organizing the donations and volunteers required some innovative thinking. “I remember the first days, there were truckloads of donations,” Jean recalled. “It got to a point where we had to figure out how to keep the volunteers, because people come to volunteer for one or two hours, but with no food or drink they’ll be tired and then they’ll leave. But when they leave nobody is sorting our stuff.” Starting an initiative where volunteers bring food for other volunteers, Jean decided to delve into her culinary experience as a chef and cook for the volunteers.

Hiding her extra activities from the concerned eyes of her husband, Jean took to the basement of her home. “I used to hide all the food that I was going to cook the next day in the basement. So there was one day, he was asleep and woke up to use the toilet, I guess. And I was downstairs peeling sacks and sacks of potatoes by myself.” Mirth bubbled to the surface as she recalled her husband’s flabbergasted reaction upon finding her surrounded by buckets of potatoes and potato peels in front of the television at 02:00 AM.

Cooking for around a hundred volunteers on top of her daily work, Jean soon found help on social media in the form of a private Facebook group. Organizing volunteers with what was described as “military precision” the ex-pat community and locals alike came together to make this initiative work. Encouraging and training volunteers resulted in a network of kitchens opening up across Hamburg to feed the volunteers supporting the refugee effort. Through the volunteer kitchens, people from different walks of life came together for a common good.

“We had doctors, we had engineers, we had people with full-time jobs coming to my kitchen, offering to peel onions. It didn’t matter that we were all so different, we came together for a greater good. There was a community that was struggling. I will never forget the friendships that I forged through this effort, because so much good came from it.” – Jean Winter.

Jean hopes to inspire more goodness and positivity through her new venture, Touch, hoping it will serve as a constant reminder that “there is kindness and goodness out there that people can see.” Wishing to address the common misconception that to be kind one needs money, Jean notes: “It’s rubbish. Just offering a smile or saying ‘thank you’ to someone is kindness. Kindness is free. If there’s anything that I’m proud of in my life is that I’m one of those thousands that contributed to make the refugees’ lives better.”

The quick and effective organization of the volunteer effort eventually led Jean to be coaxed into helping two more camps. She said: “I remember crying. I saw all the beds and makeshift beds in an old school, where they were putting up accommodation for families, kids, women…just hundreds of people on a basketball court. And how they separated their beds from each other was by tying donated bedsheets for a little bit of privacy… It’s horrible.” Moved by the human need before her, Jean once again agreed to help.

Sourcing fruits, vegetables, and an assortment of snacks to supplement the refugees’ food rations and give them little pleasures, Jean hoped to spark some element of normalcy in their upturned lives. In true Jean Winter fashion, she soon organized a donation of footballs and football gear to the benefit of the refugee children.

Through donations of garden pots and old wooden pallets and various other materials, a vegetable garden, garden furniture, and a playground sprung up, created by and the refugees themselves.

What started as a personal project to help the refugees, became a shining example of human goodness. “Through a crazy turn of events a bunch of people from different parts of the world, with different religions, different nationalities, different political beliefs somehow came together for a common goal…To share some love with the refugees that needed some friendship and care at this point where their lives are dislodged and uncertainty is their only certainty.” Jean stated on her social media, recognizing that people are able to transcend differences when working towards a greater goal.