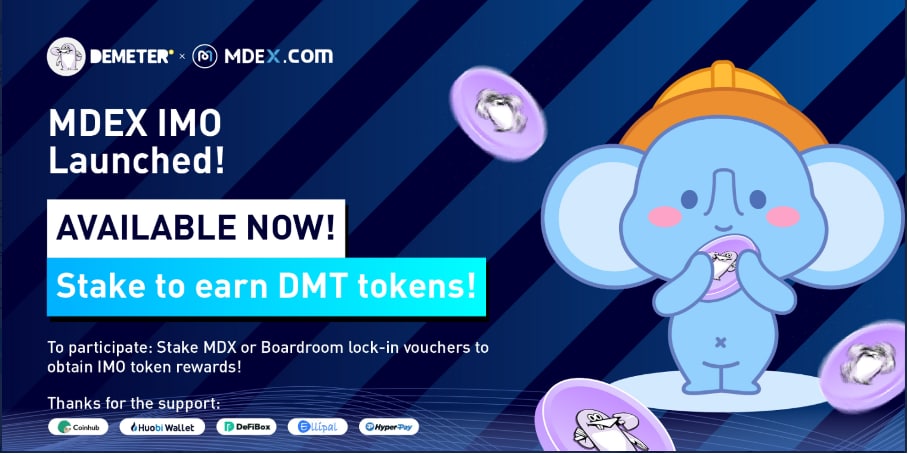 On September 13, Mdex launched the IMO for Demeter tokens and attracted over $350 million in participation.

At present, many projects on DApps are choosing to issue their initial tokens and establish liquidity in a decentralized way as it is more in line with the characteristics of the blockchain field. As a consequence, many blockchain entrepreneurs are looking for a launchpad that excels in issuing tokens and offering sufficient liquidity. This makes the competition for IDO functions enter a more refined stage: competitiveness and data playing the decisive factors.

By launching IMO under a new mechanism, MDEX not only finds more quality assets for users and but also empowers MDX. The first project under the innovative IMO mechanism is Demeter, a market protocol of decentralized cryptocurrency. DMT, the governance token of Demeter, is also issued through IMO with a liquidity pool created on Mdex.

The latest round of IMO on September 13 attracted 6,500 participants and raised a total of $350 million funds, on par with the achievements of Coinwind’s public offering in May. The highlight of this public offering is the rule of  “staking to earn new tokens” in the new IMO mechanism, with a total of over 1 billion MDXs participating in it.

The new mechanism allows users to participate in IMO with either MDX or xMDX, the Boardroom lock-in voucher. This rule frees up the liquidity of the MDXes locked in the board and provides all MDX holders with a fair opportunity to participate in the IMO. Lock-in voucher xMDX can receive different shares of tokens in the IMO, based on their different durations. Shares of tokens increase with the duration of the lock-in, i.e., the longer the lock-in period, the more tokens to be received for participating in the IMO.

For MDX holders, what’s even more exciting is that they can gain new tokens just by staking MDX, without losing their MDX or lock-in voucher xMDX positions.

Under the new IMO mechanism, participants can convert their lock-in profits into the platform tokens, which makes MDX “a gold shovel” for users. By exchanging the profits from lock-in revenue with new tokens, the platform introduces the compound interest method of investment, so that users can gain new opportunities with zero loss in their accounts.

Millions of active users: Mdex being “the first choice to launch projects”

IDO is a primary market that has always generated impressive yields. With the support of Mdex, however, it is even more valuable for investors to focus on IMO.

On May 25, Mdex conducted its first IMO, during which the Coinwind project attracted $380 million in participation, ending with a surprising number of 257 times the expectation. Meanwhile, 8,874 addresses participated in the IMO, with an exchange surpassing the expectation by over 25,726% and a token price increase by 500%, making it one of the most attractive projects. Such heat and achievement made it impossible to even believe that it occurred right after the market crash on May 19.

After the launch of Mdex, it has quickly captured a large number of users, gathered super high liquidity, and became the headline DEX as well as the ideal IDO platform. Completing token issuance on Mdex not only ensures a large number of active users of the platform but also is excellent publicity for the project itself, in terms of the promotion of its product and the building of its community.

User-friendly and community-oriented: Mdex being the cradle for high-quality assets

For entrepreneurs, Mdex is “the first choice for project launch”; in the eyes of investors, Mdex has an additional property of “the origin of multiple tokens”. Because of this expectation, Mdex has made the best professional judgment in project selection.

As the first project launched under the new IMO mechanism, Demeter is a protocol of decentralized lending and stable coins based on Heco. It is now expected to become the MakerDao on HECO.

Demeter has introduced over-collateralization for lending. The innovation lies in that user’s credit limits will be generated according to their asset factor, which is based on their assets collateralized. The amount that users can borrow and mint stable coins is restricted by the credit limit, to ensure the safety of the user’s property and that of the whole system.

Unlike traditional decentralized lending protocols, Demeter has optimized the interest rate model and collateral coefficient of its DeFi lending protocol. Demeter assets are more diversified, with the introduction of richer crypto-asset types such as LP assets, collateral assets, NFT-fi assets, etc. This optimization breaks the restrictions of decentralized lending on collateral. As credit ratings have been conducted with these assets, the lending model between currencies is highly matched, while the algorithm of interest rate adjustment is more reasonable under the premise of ensuring security.

With the more diverse and secure lending service, DUSD, Demeter’s stable coins demonstrate the same feature. Since DUSD is generated through multi-asset collaterals, it is much less risky and more stable than tokens generated based on single-asset collaterals.

Demeter has demonstrated its farsightedness and practicality in innovatively breaking the ceiling of DeFi lending collateral assets, resisting the price volatility of decentralized stable coins, and liquidation.

The new IMO mechanism brings fair opportunities to all MDX holders. The recently released Hunter program, which provides a total of $10 million to support quality projects, will further lift the competitiveness and attractiveness of Mdex in terms of IMOs. This will help build a new business ecology that covers more application scenarios and is deployed on more chains, providing global users with more convenient, high-performance, low-cost, and undifferentiated financial services.