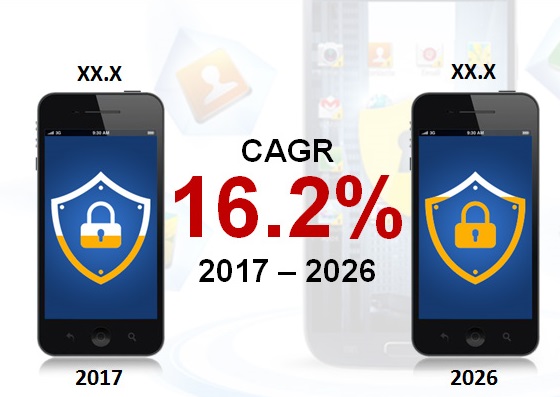 The staggering rise in the number of mobile devices used world over has upped the concerns of applications security proportionately. Smartphones and tablets are increasingly becoming vulnerable to malware, identity thefts, data breaches, and accidental loss of devices. A growing number of mobile devices used for a variety of business transactions and payments are subject to the potential risk of phishing schemes or various fraudulent activities. In the retail industry, the mounting risk has caused marked apprehensions to businesses and consumers to an extent, especially caused by fraudulent activities related to the use of credit cards. These mounting concerns are constantly stirring the demand for consumer mobile security apps. In addition, the collection of personal data for commercial use without the consent of the customers has risen in the last few years.

A vastly rising mobile payment transactions in emerging economies is also bolstering the need for consumer mobile security apps. The market has witnessed the availability of several secure mobile applications either integrated in the device or from third party vendors for various mobile OS platforms such as Android and iOS. Prominent providers of mobile devices security are offering solutions developed keeping in mind OWASP Mobile Application Security Verification Standard (MASVS). The advent of tokenization bodes well for developers.

Witnessing surge in opportunities worldwide, the global consumer mobile security app market is projected to rise at a substantial CAGR of 16.2% from 2017 to 2026, according to Transparency Market Research.

Which type of app is expected to garner wide demand and which mobile OS platform will get robust adoption?

The two major types of mobile security apps are standalone and integrated. Of these, integrated apps are witnessing robust uptake. There is an extensive demand for mobile security apps integrated to the devices and the wide preference can be attributed to their hassle-free installation and better inter-device compatibility. A growing number of technology providers in various developing and developed regions have teamed up with smartphone makers, which has bolstered the integration. The opportunities in the segment is projected to reach a valuation of US$3,000 million by 2026 end.

A substantial chunk of these consumer mobile security apps being developed are aimed for consumers using Android OS on their devices. Android operating system forms the leading platform witnessing the adoption of mobile security apps and will reach a worth of US$6.8 billion by 2026 end.

The advent of mobile security analysis tools to counter the rising menace of cyber-attacks bodes well for the market. App-Ray GmbH and App-Ray GmbH have inked a partnership deal that will allow businesses to detect vulnerabilities in their mobile applications. The app owners can upload their applications onto Kobiton test cloud wherein App-Ray’s mobile security analysis tools will scan the app for any potential threats and vulnerabilities. Business and app developers world over can reap the benefit of one of the most advanced mobile device labs.

Which region is expected to witness substantial adoption of mobile security apps?

Meanwhile, Europe and Asia-Pacific excluding Japan (APEJ) are projected to emerge as prominent regional markets. The growth of these regional market can be attributed to rapidly emerging demand for mobile security apps for securing mobile OS platforms used among businesses at large. The proliferation of mobile devices in some developing regions such as Latin America and the Middle East and Africa are also stoking the demand for such security apps.

Related Topics:Mobile Security App
Up Next

5 Ways to Increase Your Audience Engagement with Virtual Event Platform